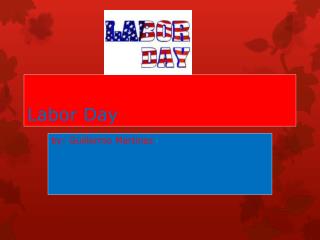 Labor Day. by: Guillermo Martinez. Who do we honor?. Labor day is supposed to honor the workers of America. It was designed to show respect and tribute for those who maintained the nation. Why did labor unions decide to celebrate Labor Day at the beginning of September?. Labor Day - . 1 st monday in september. how do we celebrate it?. president bush gives an economic speech. east The Growth &amp; Development of Labor Unions - . so, what is a labor union?. why were labor unions formed?. “how

DGP Week Two Grade 8 - . write out the sentence as you see it. o ur family had a picnic on labor day. action verb past

AVID WEEK 3 - . 9/3/12. monday: no school. labor day. bell ringer tuesday. i know what you did last summer due essential

Sweatshops and Child Labor Day 1 - . what is a sweatshop??. workplace where workers are subject to extreme exploitation