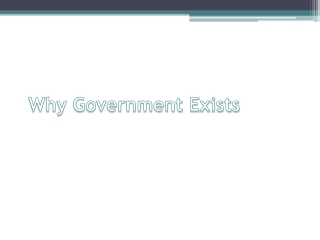 Why Government Exists. Why do we have governments?. With a partner, make a list of reasons as to why government exists. Types of Governments. Democratic Direct Democracy: all voters meet and decide course of action Why Government? - . answer in small groups:. what do you think? what is human nature? what would life be like

2 Why Government? - . why government?. people generally complain about government so why do we have it? because anarchy

Why exists such a passion in stem cells? - Increase understanding of just how conditions occur. by seeing stem cells

MGM exists to: - . seek and save the lost transform the saved restore the “ c”hurch to the community that we live in

If God exists… - - newmanlib.ibri.org -. if god exists…. why so many atheists? robert c. newman. abstracts of

Subqueries and Exists - . subqueries. a subquery is a select statement that is used to aid data selection by being nested