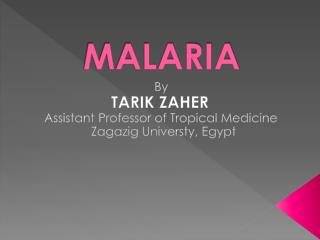 MALARIA . By TARIK ZAHER Assistant Professor of Tropical Medicine Zagazig Universty , Egypt . What is Malaria?. Malaria, the 'King of Diseases‘ Malaria - . efects of malaria. you can usually tell when someone has malaria as the will have fever, chills, muscle

Malaria - . by anne. the tropical coast →copious amounts of rain (up to 30 feet). in the northern→ much lower

Malaria - . the disease that kills millions. what is malaria?. spread by the anopheles female mosquitoes 4 types p.

Malaria - . by: kaylee lemasters , nick sinley , and zaid omar al- shobaki. type of disease. the only known name we use

MALARIA - . by group 8 (who group). malaria. what is malaria?. malaria is an infectious disease caused by a parasite,

Malaria - . malaria is a vector borne parasitic disease caused by the genus plasmodium , affecting over 100 countries of

Malaria - History of malaria. malaria has been identified as a human diseases for over 5000 years egyptian mummies show

Malaria - . by: rebekah rollston. quick facts. malaria is spread by the bite of the anopheles mosquito. 350 to 500

MALARIA - . malaria. is an acute and chronic parasitic disease transmitted by the bite of infected mosquitos and it is