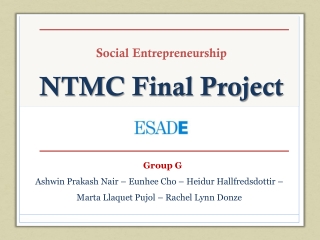 Social Welfare Final Project - . presented by tracey a. denio. self supporting – live off welfare. do people in the

Social Entrepreneurship - . on the road (to a more sustainable future) sean mcgee. what is social

Social Entrepreneurship - . what does it mean and how useful is the concept?.

Intro to Social Commentary Final Project - . tips for getting you off to a strong start. what is this???. a polished