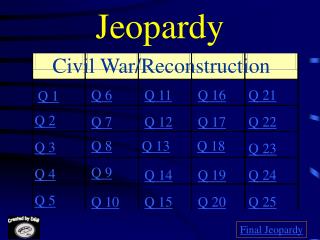 Keyboardinging Jeopardy! - . the rules: instructor/host’s decisions are final. and now…here is the host of

THE JEOPARDY GAME OF GOVERNMENT PUBLICATIONS - . when you know the answers, you can help your patrons. wednesday 1 may

Soccer Jeopardy - . created by sean o’brien. how to play soccer jeopardy. there are 3 categories to choose from.

CUSTOM JEOPARDY! - . and now, here is the host of jeopardy…. miss sangalli. this is jeopardy!. today’s categories

JEOPARDY - Us constitution. jeopardy. contestants. don’t forget. …always phrase your answers in the form of a

Inhalants Jeopardy - . review game october 31, 2014. inhalants. to inhale means…. to breathe in or take in. category 1