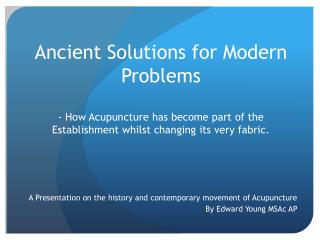 Ancient Solutions for Modern Problems - How Acupuncture has become part of the Establishment whilst changing its very fabric. A Presentation on the history and contemporary movement of Acupuncture By Edward Young MSAc AP. Our 90 minutes together: . Social media has become an integral part of modern society - . in this article, we’ll review the history and evolution

Why Affordable Moving Has Become Very Popular - In the recent times, people have completely adopted the idea of

Has become - . introducing…. the new national bsa training format for leadership development. this program follows the

LG Repair Problems: iLogic has Powerful Solutions for the same - Http://www.ilogic-repairs.com/lg-repair/ - the

Problems of the modern world - . the author : aleksandra nesterova school №34. the main

Idol culture: problems and its solutions - . the problems. crazy fans are known to : wait at the airport or anywhere

Common Hair Problems And Its Solutions - Your hair needs a surprising amount of maintenance in order to truly thrive, but

Art of Establishment Part 2 - . presented by lee fisher, s arah delgado, and a my b urgoon. strong families make a strong

Art of Establishment Part 1 - . presented by lee fisher, s arah delgado, and a my b urgoon. strong families make a strong

SEO Takes Its Part in the Modern World - Asher’s creation is a team of elite search engine optimizers (seos), skilled