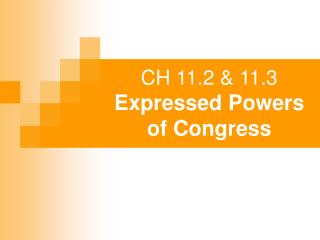 CH 11.2 & 11.3 Expressed Powers of Congress. The Power to Tax. Tax - a charge levied by government on persons or property to meet public needs. The Constitution gives Congress the power to tax in order to meet public needs, protect domestic industry, or protect public health and safety.

Powers of Government - . constitution – a set of customs, traditions, rules, and laws that sets forth the way a

The Powers of Congress Section 1: The Scope of Congressional Powers - . the essential questions. what are the three types

The Legislative Branch: Congress - . congress. there are two chambers of congress: the house of representatives the

The Implied Powers of Congress - . chapter 11.2. the necessary and proper clause. *the constitutional basis for the

Congress’s role with respect to administrative agencies - . constitution vests each branch of government with

The Powers of Congress - . powers granted to congress. delegated powers give congress the authority to make laws in five

Congress and the President - . the president and congress. formal powers: agenda setting treaties and nominations state

Chapter #3 Review - . q: what is the main role of congress?. a: make laws. powers given to congress that are not