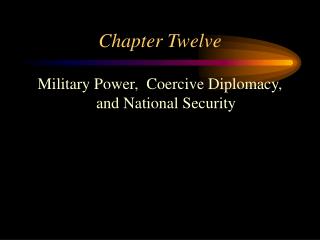 Chapter Twelve. Military Power, Coercive Diplomacy, and National Security . Elements of Power. power: the factors that enable one state to coerce another power potential: the relative capabilities of a state considered essential to asserting influence over others military capability

Chapter Twelve - . waves. waves. a wave is an oscillation that travels from one place to another. if you poke a floating

Chapter Twelve - . environments of care. environmental management. as far back as florence nightingale nurses were