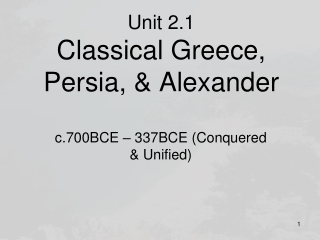 Unit 2.1 Classical Greece, Persia, & Alexander. c.700BCE – 337BCE (Conquered & Unified). Ancient Greece. The Crucible of Civilization. cru·ci·ble : a place or situation in which concentrated forces interact to cause or influence change or development. Geography.