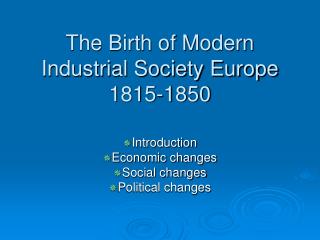 The Birth of a Modern Consumer Society? - . dr chris pearson. lecture questions:. how and why did a consumer society

Pre industrial/modern society - . prior to the industrial revolution, families and communities worked the land together.

The Birth of Modern Linguistics - . ferdinand de saussure why linguistics is a science? science and ideology basil

The Birth Of Modern Nation - . unit5 day 1. settling the west. mining brought the 1 st settlers to the west. comstock