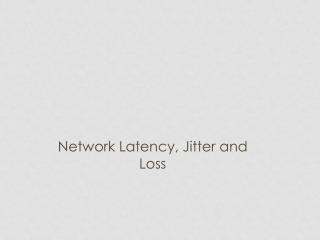 JITTER - . impact on clock distribution in lhc experiments s. baron - twepp 2012. understand the contributions of all the

Delay Jitter - . ketan mayer-patel. what is jitter?. jitter: variation in delay can be measured as the variance of delay.

Network Loss Planning - . received volume control subscribers must have a received signal level within an appropriate

Jitter and Phasenoise Devices simulation - . jitter is a measurement of the variations in the time domain, and

2.5Gbps jitter generator - . part 1 final presentation. what is jitter?. by definition, jitter is the short term

LATENCY, LYSOGENY and SYMBIOSIS - . living with the host. what is latency?. a period of quiescence (restricted or no