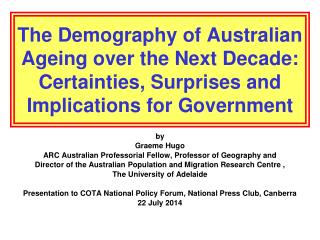 The Demography of Australian Ageing over the Next Decade: Certainties, Surprises and Implications for Government. by Graeme Hugo ARC Australian Professorial Fellow, Professor of Geography and Director of the Australian Population and Migration Research Centre , The University of Adelaide

Guttering Adelaide - We specialise in gutter installation and replacement, in addition to supplying and fixing downpipes