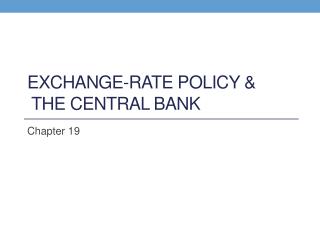 Monetary Policy and Foreign Exchange Rates - . fundamental issues. what is the monetary approach to exchange-rate

Exchange Rate Policy - . just after ww2: high inflation, shortages of goods and foreign exchange began to use the

CENTRAL BANK AND MONETARY POLICY - . mario a. garcía lara vice-president of the banco de guatemala. origin of the

Financial Institutions and Markets - . central banks and monetary policy. outline of contents. a recap of topic 05

International Finance - . lecture 3 exchange rate and balance of payments. after studying this unit, you will be able to: