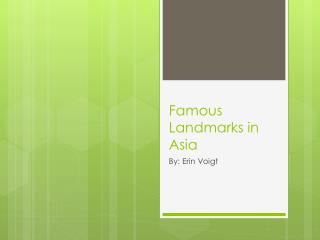 Famous Landmarks in Asia. By: Erin Voigt. Northern China. Construction of the Great Wall of China began in the fifth century B.C. The Ming Dynasty extended it in the 1400s to defend against the Mongolian armies to the north. Famous Landmarks - . italy paris, france. learning target. i can explain how culture defines my chosen groups and how

Famous landmarks in Paris - In the beautiful paris city, there are many monuments that are keeping track of the

Famous landmarks in the southeast - . nashville , tennessee. the grand ole opry began in 1925 in the wsm radio studios in

Famous Landmarks Photo Quiz - . for each question, name the country that the landmark can be found in. which country

OUR MOST FAMOUS LANDMARKS