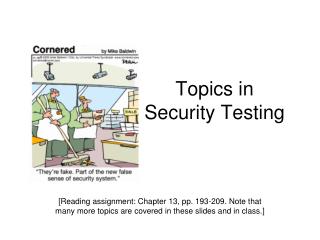 Topics in Security Testing. [Reading assignment: Chapter 13, pp. 193-209. Note that many more topics are covered in these slides and in class.]. Computer Security. The goal of computer security is to protect computer assets ( e.g., servers, applications, web pages, data) from: corruption Presentation Topics - The every student succeeds act: where are we now and where are we going? new jersey association of

TESTING PPT - This is a testing

Topics in this presentation - . why review the system 2. what the committee did 3. who are the committee? 4. themes

Presentation topics - How to write competitive proposals for research funding: strategies for starting your career as a

Testing PowerPoint - . by claudia novak. the end. brought to you by the friendly fabulous