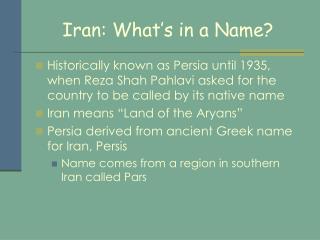 Iran: What’s in a Name?. Historically known as Persia until 1935, when Reza Shah Pahlavi asked for the country to be called by its native name Iran means “Land of the Aryans” Persia derived from ancient Greek name for Iran, Persis Name comes from a region in southern Iran called Pars.

IRAN - . from tehran, to the caspian sea, to esfahan. shayad monument. outside the house kuche karyabi. inside the marble

Where is Iran? - . there….is iran! . where is iran?. iran 's landscape is dominated by rugged mountain ranges that

This presentation is based partly on a summary of a recently completed book that was published in 2008 by Routledge: