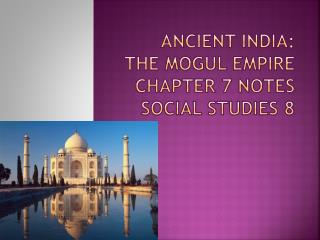 Ancient India: the mogul empire chapter 7 notes social studies 8. Mogul Empire. Moguls from central Asia, related to the Turks, conquered the Indus plain Akbar was made ruler at 13 in 1556 At 19 he led the army and over 43 years they expanded the Mogul empire (he almost never lost a battle!) The British Rule of India - . ian woolford department of asian studies the university of texas at austin. the british

The British Empire and The Commonwealth of Nations - . the building of the empire began with a sea voyage to north

Ancient China 1. The origins of the society: fact and myth - 2. compare china’s population with the rest of the world