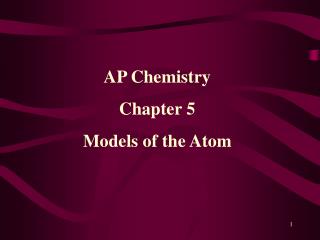 AP Chemistry Chapter 5 Models of the Atom. Beginning of the Atomic Model. Democritus was the early (around 400BC) Greek philosopher who is credited with the concept of the atom ( atomos ) –which means invisible. Chapter 5 Electrons in Atoms - Section 5.1 models of the atom. objectives:identify the inadequacies in the rutherford

Chemistry Chapter 3 - . atoms: the building blocks of matter. atom who?. atom the ________ particle of an element that

Lecture 23 Models of the Atom - . chapter 28.1  28.4. outline. the thomson and rutherford models atomic spectra the

BASIC CHEMISTRY - . chapter 7. what is matter? the atom concept. matter is everything in the universe that has a mass (

The Chemistry of Life - . chapter 2. the nature of matter. introduction to “baby chemistry” life depends on chemistry

Chapter 5 – Models of the Atom - . do now – current events and chemistry objective – chap 4 review 5.1 models of

Atomic Models - . atomic models. what does the atom look like? since the micro fine structure of the atom can not be

Chemistry Chapter 7 - . valence electrons an electron in the highest occupied energy level of an atom. to find the number

Chemistry Chapter 5 - . the periodic law. history of the periodic table. stanislao cannizzaro in 1860 he presented a

Inside the Atom - . models of the atom the nucleus. early beliefs. 2500 ya, early greek philosophers believed that if you

Atom Model History - . where did it all begin?. what is an atom?. the smallest particle of an element that can keep the