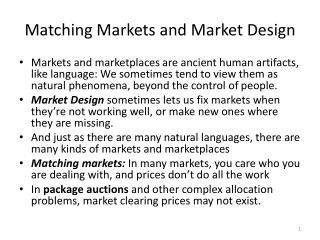 Matching Markets and Market Design. Markets and marketplaces are ancient human artifacts, like language: We sometimes tend to view them as natural phenomena, beyond the control of people. Markets and Market Failure - . a preview. a story . wolves until 1985 we paid to shoot them. good for nature—already

Design Matching Your Needs - The modern design of ethanol fireplace come in steel and glass finish. for a more

Market Segmentation and Target Markets - . gradually, the brand extended itself to products catering to a different

Consumer Markets And Industrial Market - . the aim of marketing is to meet and satisfy target customer’s needs and