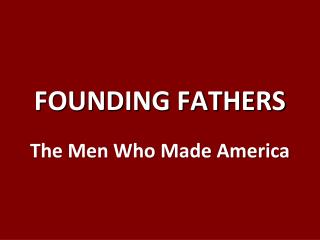 FOUNDING FATHERS. The Men Who Made America. GEORGE WASHINGTON The Father of Our Country. Served as an officer in the French and Indian War (1754 – 1763). Commander of American Army during the Revolutionary War (1775 – 1783). Signed Constitution. Founding Fathers - . dylan howard. background:. this was released after the president’s push for patient protection

The Founding Fathers - . troy peters. benjamin franklin: jack of all trades. he created the first fire department and

Founding Fathers Presentation - All of you have been assigned a founding father to research : you must answer the

Our Founding Fathers? - . who were they?. george washington. appearance: tall, built, and a superb athlete led the