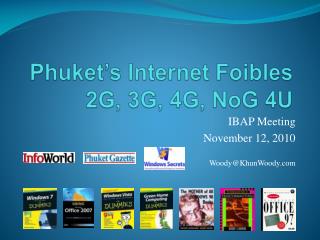 Phuket’s Internet Foibles 2G, 3G, 4G, NoG 4U. IBAP Meeting November 12, 2010 Woody@KhunWoody.com. Q: What’s up with 3G?. Thai courts blocked the 3G auction in October But we now have 3G throughout Bangkok, Chiang Mai We even have real 3G on the west coast of Phuket Phuket Flight Guide - If you need phuket travel guide and flights from uk, it is very useful for getting cheap flights

You are handling Mices and Incentives Groups in Phuket? - . you are looking for the right partner to organize yours

Modelling and Simulation of Tsunami Waves for Improved Defence Provision in Phuket - . สวัสดีครับ

Professional Wedding Photographer in Phuket, Thailand - Welcome to phuket photography! i am bonn chirdchom a professional