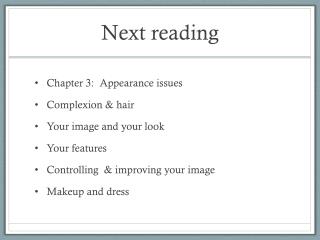 Next reading. Chapter 3: Appearance issues Complexion & hair Your image and your look Your features Controlling & improving your image Makeup and dress. Next reading. Voice issues What we started with and more Continue to use for practice Practice and conditioning Reading Next - . reading in the secondary classroom presented by shelly smede. tips for teachers presenting to other

READING NEXT &amp; WRITING NEXT - . reading next. recommendations for meeting the needs of struggling readers. 15

Reading for the Next Week - . sequence analysis and alignment chapter 5, chapter 8, chapter 11 only about the 1st third

Reading the Next Generation Science Standards - . a little background…. next generation science standards - based on

Applying Research to Reading Instruction: What s Next - Why research?. lack of growth in reading achievement in more than

Why You Should Choose Oranum for Your Next Psychic Reading - Do you have questions in your life but very few answers? if