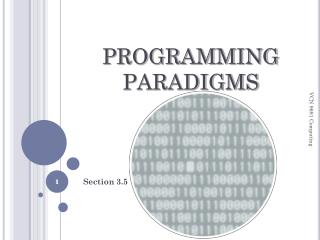 Market Oriented Cloud Computing - . vision, hype, and reality for delivering it services as computing utilities. by

03-60-440: Principles of Programming Languages Classification of programming languages - . “there are only two kinds of

Overview of Programming Paradigms - . lecture objectives: be able to explain the differences between programming