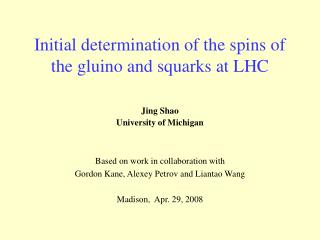 Initial determination of the spins of the gluino and squarks at LHC. Jing Shao University of Michigan Based on work in collaboration with Gordon Kane, Alexey Petrov and Liantao Wang Madison, Apr. 29, 2008. Motivation. Initial determination of the spins of the gluino and squarks at LHC - . jing shao university of michigan based on work

Flavour violating gluino three-body decays at the LHC - . helmut eberl in collaboration with a. bartl, b. herrmann, k.

Impact of squark generation mixing on the search for squarks and gluinos at LHC - . k. hidaka tokyo gakugei university in

The Benefits of Free Spins at 123 Spins - Another appealing bonus it offers is that with a minimum deposit of £10, a

Determination of SUSY Parameters at LHC/ILC - . hans-ulrich martyn rwth aachen &amp; desy. outline. why and how to

NLL soft and Coulomb resummation for squark and gluino  production at the LHC - . chris wever (itf utrecht). based on:

…AT THE LHC - Dark matter …. …at the lhc. alan barr university of oxford. on behalf of the atlas and cms

Determination of the gluon polarisation at HERMES - . n. bianchi on behalf of: the hermes collaboration &amp; the

Probing the Sevolution of the Universe at the LHC - . amitava datta department of physics jadavpur university kolkata.

The status of the lhc and future projects at cern - . emmanuel tsesmelis directorate office, cern &amp;

The Challenge of Detecting and Measuring Muons at the LHC - . v. polychronakos physics department brookhaven national

Status and Prospects of the CMS Experiment at the LHC - . darin acosta university of florida. including lhc highlights.

Overview of the CMS experiment at LHC - . guido tonelli university of pisa/infn/cern why and how cms was designed status

Overview of Higgs Physics at the LHC - . jim olsen princeton university (on behalf of cms and atlas) 42 nd slac summer