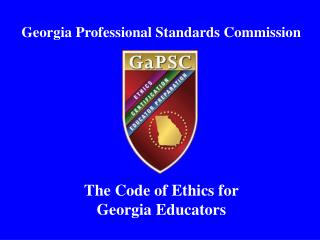 Georgia Professional Standards Commission - 20-2-984.1. adoption of a code of ethics.. (a) it shall be the duty of the

Georgia Professional Standards Commission - . the code of ethics for georgia educators. 20-2-984.1. adoption of a code of

Georgia Performance Standards - . standards. essential questions. how does reproduction vary among organisms? how do