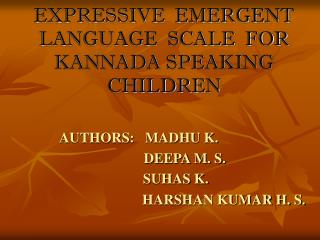 Do children with cleft palate have expressive and receptive language impairment

Receptive Language Disorder - . a type of disorder affecting the ability to understand spoken and sometimes written

Expressive Language Disorder - . a communication disorder in which there are difficulties with verbal and written

Revised Reducer-Augmenter Scale - . total scores can range from 21 to 126, with lower scores reflecting a tendency toward

Speaking Their Language - Making connections. speaking their language. 7 seconds!. are you approachable? are you a friend

Prenatal Smoke Exposure and Language Outcomes at 15 Months: Social Aspects of Communication vs Expressive and Receptive

Receptive Field - . [green]. receptive field. the two-point threshold for any part of the body is determined by the size

Language Development for Bilingual Children - . christine cordina churchfields language facility. what do we mean by

Expressive - . portraits. more then meets the eye . how does the use of colour in this portrait make you feel? . why