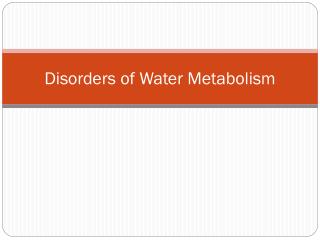 Disorders of Water Metabolism. What primarily affects Sodium levels in the body?. Physiology of water balance. Almost all dysnatremias are a result of water balance TBW = 60% total body weight Chapter 14 Psychological Disorders - . what is normal?. psychopathology : scientific study of mental, emotional, and

Metabolism is the transformation of energy and matter within the body. Anabolism ~ constructive metabolism Energy IS

Psychological Disorders - . what do you think?. write a definition for a psychological disorder. do not give

Medications - . as of 19 april 2014. powerpoint. this powerpoint is weak as to the source of the answers. many relied

METABOLISM - . introduction. the fate of dietary components after digestion and absorption constitute metabolism –