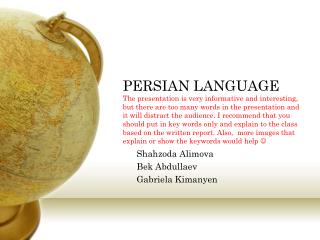 Gabriela Gottlib - . geometry journal #1. what is a point, line, plane. point: a point is a dot that describes a location

Gabriela Mistral - . destiny coalson. fear ( 1945). i don’t want them to turn my little girl into a swallow. she would

Bek Travel- Visit Western Mongolia - We are a travel agency in mongolia. we are here to guide and help you to make your