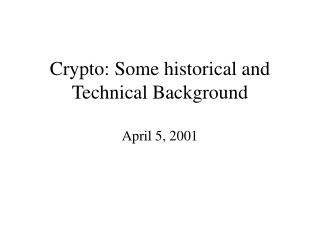 Crypto: Some historical and Technical Background April 5, 2001. Some Definitions. Plaintext: the unencrypted text Ciphertext: the encrypted message Steganography: hiding message in other message (or even in a picture) one-time pad: a set of keys used at most once

Illinois Constitution - . historical background. admitted into the union in 1818 as the 21 st state has had 3 state

All About Lions -  history .  organization. all about lions.  membership.  service. founded - 1917. “you