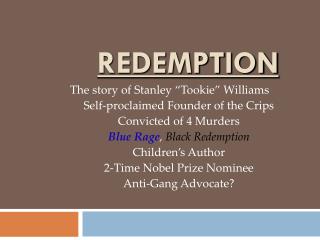 REDEMPTION - . redemption: “to loose; loosen; to buy back; to release on receipt of ransom” mat 20:28 just as

Redemption objective - . in this phase, you will come to realize what actually took place when you received the gift of

Redemption Song - . israel houghton. i was lost, i was desperate and broken wounded heart and the wounds were still open.

English Redemption - . http://www.youtube.com/watch?v=xigmkj0nsna. what we learned this week. “shall i compare thee to

Ruth’s Redemption - . meanwhile boaz went up to the town gate and sat there. when the kinsman-redeemer he had mentioned

The Shawshank Redemption - . close viewing. the rooftop - freedom. the background of the prisoners is offset by the

DNA Replication Redemption - . how to prove to us you know your stuff, this time…i swear!.

The Shawshank Redemption - . a discussion. beginning scenes. what happens to andy dufresne and red? what do we learn of