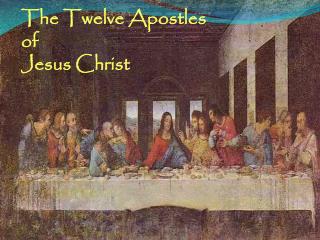 The Twelve Apostles of Jesus Christ

The Twelve Apostles of Jesus Christ. St. Andrew. Since he was crucified on an X-shaped cross (which is called "Saint Andrew's cross) it is one of his symbols. A symbol of two crossed fish has also been applied to Andrew, because he was formerly a fisherman. .

The Twelve Apostles of Jesus Christ

The Apostle Andrew - . a lesson by bishop andy c. lewter, d. min. other name of the apostle

st thomas apostle - . the story of my name. named reed after mom maiden name. named thomas after uncle george . i love my

John the Apostle - . by molly and janet. his family and friends. his brother was james their friends were peter and

Who Is An Apostle? - . a proposal in understanding paul’s apostleship. pastor eric douma april 4, 2010. paul: apostle

THE MAKING OF A LEADER Peter, the Apostle with the Foot-Shaped Mouth Luke 22:31-32 - . 2 philip bartholomew/nathanael

What do You know about Jesus’ Disciples? - On sunday, june 17 th at 7 pm, pastor jim will teach on the life and

The Acts of the Apostles and Saint Paul - . the bible course. document # tx001083. basic facts about the acts of the

The Twelve Apostles - . the twelve apostles is a collection of limestone stacks off the shore of the port cambell

In The Footsteps Of The Master: The Life and Times of Jesus Christ - . jesus calls the twelve may 10, 2009.

The martyrdom of the 12 Apostles and other followers of Jesus - . james (john’s brother). james, the apostle of the

What is the difference between a disciple and an apostle? - What sort of people did jesus choose &amp; why?. watch

The Twelve Apostles - . simon peter. fisherman had a mother-in-law one of three always with jesus tried to walk on water

Everything You Need To Know About Judaism And Christianity To Succeed In AP World - Ap world review: video #8: judaism