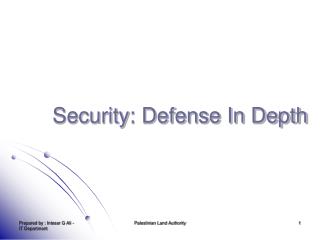 Security: Defense In Depth. The layers of defense in depth are. Data . An attacker’s ultimate target, including your databases, Active Directory service information, documents, and so on. Application . The software that manipulates the data that is the ultimate target of attack.