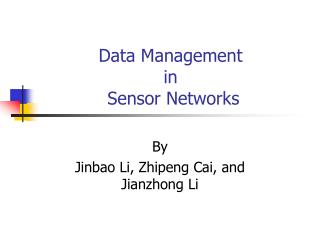 Data Management in Sensor Networks. By Jinbao Li, Zhipeng Cai, and Jianzhong Li. Introduction. The purpose of data management in sensor networks is to separate the logical view (name, access, operation) from the physical view of the data Topology Management In Sensor Networks - . the need for topology management. what is it? the physical or logical

Data centric Storage In Sensor networks - . based on balaji jayaprakash’s slides. overview of the seminar. introduction