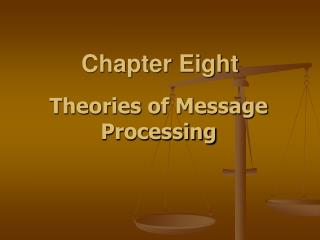 Chapter Eight. Theories of Message Processing. Classic Models of Persuasion: Cognitive Dissonance Theory. Developed by Festinger Individuals have a need for consistency between attitudes and behaviors When we behave in inconsistent ways, we feel discomfort Chapter Eight - . slutsky’s equation. effects of a price change. what happens when the price of a commodity