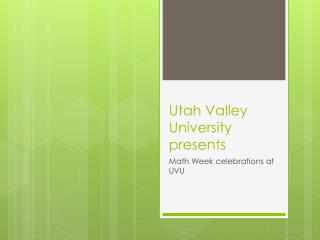 Utah Valley University Request for Proposals - Request for proposal: the document used to solicit proposals from

Murrieta Unified Valley School District Presents: - Goals of the session: . how to obtain esscp grant15 plus tips for

the Utah Phoenix Alliance Presents… - . tobacco 101. what we as a generation think about tobacco….

Utah Valley University New Age Procurement - . some positive changes have been made. why?. update to state code. why code