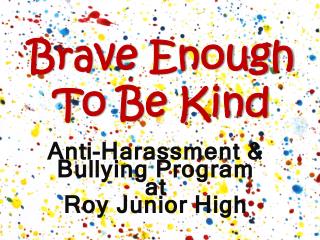 Brave Enough To Be Kind. Anti-Harassment & Bullying Program at Roy Junior High. Harassment. Bullying. What do these words make you think of?.  Harassment is when someone keeps doing or saying things to have power over another person. .  Bullying is a form of harassment. BE BRAVE - . el cajon valley high school guidance department. our time together. graduation requirements how to read your

How to Be Brave and Courageous - Do you wish you could become brave and courageous? well you can! just check out this

Be kind to our books ! - . the shediac public library would like to share with you:. tips to help you take good care of

Be Safe Be Kind Be Responsible - . school wide reward systems that work!. by megan jones and sonia lulay 3 rd grade

Canyoning Dalat - are you brave enough to enjoy it yet? - When choosing to participate in adventure games in dalat such

2 – JESUS TEACHES ME TO BE KIND - . jesus died for me because he loves me. i have to love others. st. pachomius the

“I can’t praise them enough to be honest” - “most importantly, we patients prefer and hope to be at home not in