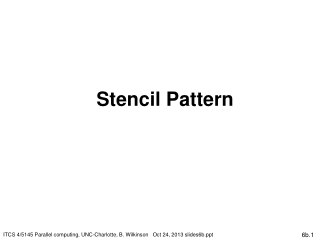 Stencil Pattern. 6b. 1. ITCS 4/5145 Parallel computing, UNC-Charlotte, B. Wilkinson Oct 24, 2013 slides6b.ppt. Stencil Pattern. A stencil describes a 2- or 3- dimensional layout of processes, with each process able to communicate only with its neighbors.