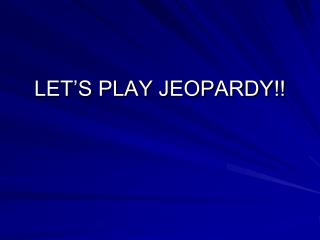 LET’S PLAY JEOPARDY!!. Jeopardy!. $. $. $. Final Jeopardy. Category 1: $100. When and where did the Second Continental Congress officially adopt the American flag also known as the “Stars and Stripes” and “Old Glory”?. Why more play makes you more productive - Most people think play is a non-essential, optional, inconsequential part of

Welcome - . to. jeopardy!. world religions and philosophies. final jeopardy. round 2. round 1. daoism &amp;

JEOPARDY - American revolution. jeopardy. contestants. don’t forget. …always phrase your answers in the form of a

Welcome - . to honors us. jeopardy!. final jeopardy. round 1. round 2. quotes. treaties and foreign policy. progressive

JEOPARDY - Road to the american revolution. jeopardy. contestants. don’t forget. …always phrase your answers in the

JEOPARDY - Andrew jackson. jeopardy. contestants. don’t forget. …always phrase your answers in the form of a