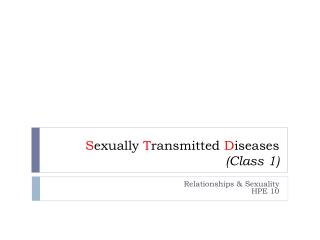 S exually T ransmitted D iseases (Class 1). Relationships & Sexuality HPE 10. By the end of this class, you will be able to…. Identify the rates of occurrence of STD’s in high school students in Connecticut (YRBS). S exually T ransmitted D iseases - . relationships &amp; sexuality hpe 10. by the end of this class, you will be able

S exually T ransmitted D iseases - . this is an infection that can be transmitted through sexual contact with an infected

V A T D Y E S - . vat dyes are one of the important class in the synthetic dyes produced. these dyes are characterised by

Angus D-T - . my school goal. to not talk in class and ignore people who start talking to

D G = D H -T D S - . d h depends on the numbers and kinds (covalent and non-covalent) of bonds made and broken upon going

Chapter 24 STDs/ STIs - . what are stds? . anyone who has with another person risks contracting a sexually transmitted