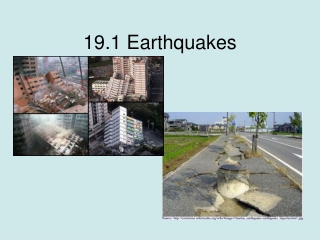 19.1 Earthquakes. Forces Within Earth. Most earthquakes are the result of movement of the Earth’s crust produced by plate tectonics At the boundary between two plates, stress often builds up Stress is the total force acting on crustal rocks per unit area 19.1 Earthquakes - . forces within earth. most earthquakes are the result of movement of the earth’s crust produced

Sociology 19.1 - . group behavior. what is sociology. sociology is the study of society and human social action includes

19.1 Ecology - . the study of interactions between organisms and the living and nonliving components of their

Chapter 19.1 - . the sun, earth, and moon. objectives:. by the end of this section you will be able to… describe why

19.1 introduction - Objectives. in this tutorial, you will learn:to be able to use dreamweaver mx 2004 effectively.to