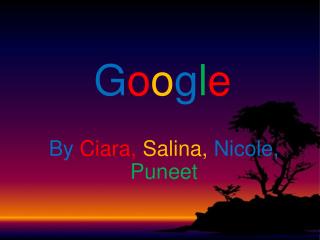 G o o g l e. By Ciara, Salina, Nicole, Puneet. Search. Google search is the most useful and most used web browser in the world. When searching up something, the highest rated page for information will show up first. Google search was developed in 1997. G o o g l e + - . session objectives: by the end of this session, participants will be able to: identify the basic

G o o g l e Docs - . o b j e c t i v e. after being shown the steps, the trainees will create a new document within