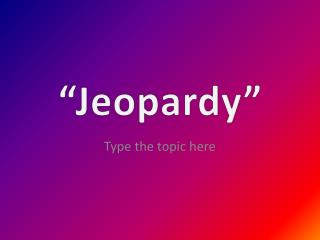 “Jeopardy”. Type the topic here. Topic 1: 1 point. The philosophy that has shaped the Chinese political system since the 6 th century B.C.E. What is Confucianism?. Topic 1: 2 points. “The place that is the center of civilization”. What is the M iddle Kingdom?. Topic 1: 3 points. Jeopardy - . lord of the flies. jeopardy. on to double jeopardy or final jeopardy. characters - 100. the first character