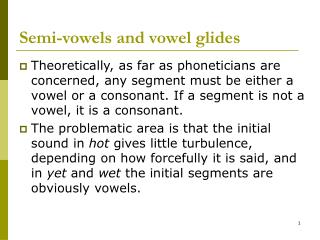 Semi-vowels and vowel glides. Theoretically, as far as phoneticians are concerned, any segment must be either a vowel or a consonant. If a segment is not a vowel, it is a consonant. SEMI-VOWEL /j/ - . approximant palatal. which organs of speech is used in producing /j/?. why is it a semi-vowel?.

Vowels and Algorithms - . in english, spanish, french, portuguese, german, and italian. vowels and algorithms. in