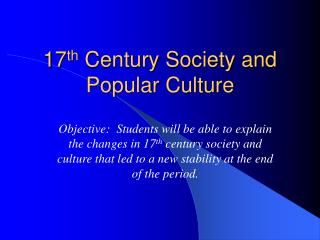 17 th Century Society and Popular Culture. Objective: Students will be able to explain the changes in 17 th century society and culture that led to a new stability at the end of the period. Population trends. 18 th Century Popular Culture - . popular literature. designed for those who could barely read or what was going to be

Eighteenth-Century Society and Culture - . the west chapter 17. the aristocracy. included titled noblemen, who had great

17 th Century concepts - . applicable to othello. marriage and love. marriage was a matter of business rather than of the

The 17 th Century - . absolutism and the age of louis xiv. absolutism: what is it?. sovereign power or ultimate authority

17 th Century England - . parliament vs. the stuarts in the power struggle of the century. 1. tudors to stuarts; divine

17 th Century History - . by daljinder bhangoo. a time of revolutions. the 17 th century was marked by the start of

17 th Century, Century of Genius - . in the early 1500’s those who probed into the secrets of nature did so in the