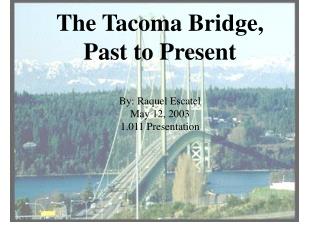 The Tacoma Bridge, Past to Present By: Raquel Escatel May 12, 2003 1.011 Presentation. Tacoma Narrows . For years it had been clear to Washington State officials that the Tacoma Narrows would have to be bridged in order to open up the thinly populated Peninsula. Solution:. Bridge Energy ASA NFF Small EP 5 April 2011 - 2. disclaimer. this presentation and its appendices (together the

Sponsored by the South Sound Chapter of the Washington Native Plant Society See www.southsoundchapterwnps.org for more

The Present Perfect Has + Past Participle - . page 214 – chapter 5 realidades 3. the present perfect. in english we

Reflections on the Past Report on the Present Envision the Future - . nahmma's 2005 conference september 21, 2005 tacoma,