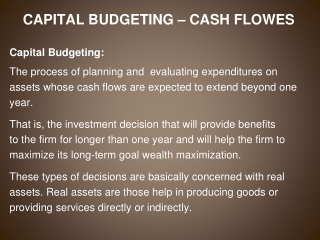 CAPITAL BUDGETING – CASH FLOWES Capital Budgeting: The process of planning and evaluating expenditures on assets whose cash flows are expected to extend beyond one year. That is, the investment decision that will provide benefits