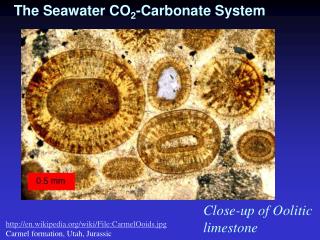 The Seawater CO 2 -Carbonate System. Close-up of Oolitic limestone. http://en.wikipedia.org/wiki/File:CarmelOoids.jpg Carmel formation, Utah, Jurassic. Some of the major geochemical roles of the CO 2 system in seawater include: seawater pH control and buffering Carbonate System Alkalinity - . lecture 21 . tot h. tot h is the total amount of component h + , rather than the total of

Carbonate System and pH - . why study the carbonate system? involves carbonic acid – an example of an acid-base

Carbonate System and pH - Model. co2 dissolves when it comes in contact with waterthe amount dissolved depends on

Carbonate System and pH - . why study the carbonate system? involves carbonic acid – an example of an acid-base

THE CO 2 -H 2 O SYSTEM - I - . carbonic acid is a weak acid of great importance in natural waters. the first step in its

Seawater - . pure h 2 0 and ………. salts. where do the salts in seawater come from?. calculating salinity. salinity =

Carbon Dioxide and Carbonate system - . carbon cycle - why is it important?. regulates temperature of the planet

Seawater Properties - . seawater. how did the water get salty? 1. chemical weathering of rocks on land 2. from the