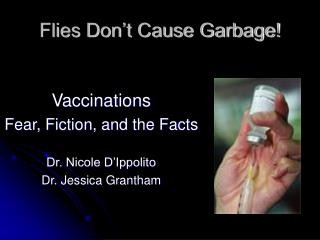 Flies Don’t Cause Garbage!. Vaccinations Fear, Fiction, and the Facts Dr. Nicole D’Ippolito Dr. Jessica Grantham. More parents are rejecting vaccinations for their children and themselves. They consider the vaccines more dangerous than the disease Lord of the Flies - . what does it mean to be civilized?. common core state standards in lord of the flies. key ideas and

Creator Element Authority Control - . garbage in, garbage out: input standards and metadata. scheme is only half of the

Lecture 32 NOVEL II - . synopsis. comparison between james joyce and virginia woolf a comprehensive talk on the lord of

The Kite Runner by Khaled Hosseini There is a Way To Be Good Again - . english ii: world literature. what are some of the