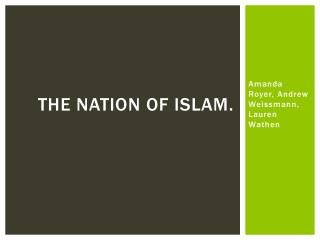 The Nation of Islam. The Nation of Islam.

Dar al-Islam - . literally = house of islam commonly refers to lands heavily influenced by islam or where muslims can

BASICS OF ISLAM - . a brief overview of basics of islam a.s. hashim md. islam. islam is the final religion of god islam

Islam - . by najiba haque. islam: the second largest world religion...and growing. what is islam?: islam is a religion.

Early Expansion of Islam - . the spread of islam. main idea 1: muslim armies conquered many lands into which islam slowly

ISLAM - By : george,denis. islam. did you know…. muslims are people who follow islam also a building they worship is

Islam - Click here: introduction to islam. islam. islam means ‘peace through submission’ to the revealed will of

ISLAM - . submission to the one god. islam – “submitting to one god”. the name islam is derived from the arabic

Islam - . global studies 9 mrs. hart and mrs. bernier. roots of islam: region of origin. islam was founded on the arabian

The Rise of Islam - . islam in the middle ages. muslim: someone who practices the monotheistic faith of islam (submission

ISLAM - . beliefs and practices. i . components of the faith. islam : means “submission to god” muslim : a follower

Islam - . what do muslims believe. demographics. originated in saudi arabia 23% of the world (christian = 33%). islam’s

Malcolm X - . a civil rights activist: as a leader of nation of islam as a shiite muslim. we will talk about…. hajj and