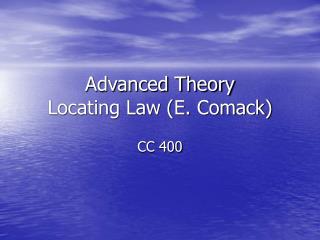 Advanced Theory Locating Law (E. Comack). CC 400. In order to understand the law/society relation, we need to place law within the nexus of race, class, and gender relations in society. We should think of social theory as a “set of answers to questions we ask of social reality.”.

Light - . what you see (and don’t see) is what you get. theories of light. wave theory particle theory

Chapter 3 Managing the firm - . school of economics and business administration universidad de navarra. theories of the

Theory of Special Relativity - . theory of special relativity. einstein is recognised for: encompassing all of the known